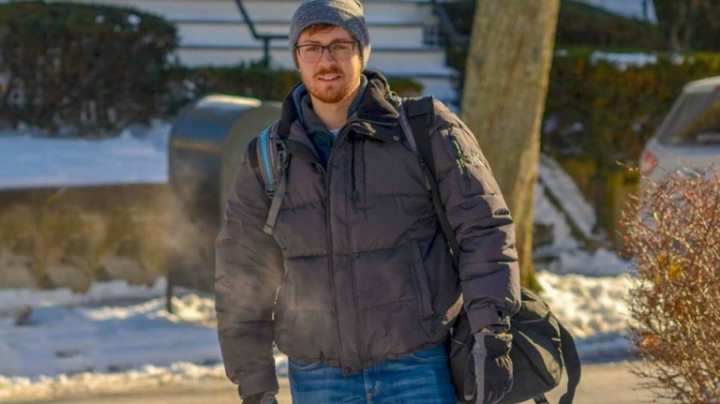 Although the sports section of The Torch is traditionally filled with articles on how UMassD teams and  New England’s professional teams are faring, this week The Torch is recognizing a UMass Dartmouth Alum and a former Torch writer in his personal athletic endeavors as well as the big impact he is generating.

Matt Litchfield graduated from UMass Dartmouth in 2017 with a bachelors in English and French. While he did not participate in athletics here on campus, Matt is certainly making an impact with sports in his post-grad life.

This summer, Matt plans on biking across the United States, from Baltimore to Seattle, to raise money for young people affected by cancer. Matt is working to achieve this remarkable feat through the The Ulman Cancer Fund for Young Adults, which is a charity that works to donate money and resources to the nearly 70,000 young people that are affected by cancer every year.

When asked about why he was riding, I must say Matt’s answer was simple, yet profoundly impactful all at once.

“For young adults, cancer is not only physically and emotionally difficult, but also socially; it is isolating to be diagnosed with cancer at any age, but especially so when you’re in a period of peak health. The Ulman Cancer Fund for Young Adults provides young adults with community, in addition to providing patients and survivors with other support programs like scholarships, athletic programs, housing, and care packages.”

He went onto discuss the impact that cancer had on his own life as he recounted his own grandfather’s struggle with colon cancer as well as his grandmother’s struggle in caring for him. He lived with his grandparents for the second half of his junior year.

“It wasn’t stressful for me like it was for my grandmother, the career nurse and family hero who takes care of him, but it was still hard to watch. I was confronted with mortality on a daily basis, which is not something most of my friends living on campus could relate to at the time. I want to support people whose relationship with cancer is even more fraught – I want to show them that they’re not alone.”

Matt might not be on a team or even competing per say, however, it is obvious that Matt’s efforts on a bike this summer will impact the lives of so many people that are faced with the daunting challenge that is cancer.

It would be a massive understatement to say that Matt has dived head first into the world of cycling in order to complete the challenge of riding 80 to 120 miles per day this summer. Matt is currently riding four hours a week minimum, along with weight lifting three to five times per week. He also plans to increase his riding time to ten hours a week as the start date of his journey grows closer.

To make matters even more difficult, Matt is currently teaching English in Saint-Etienne, France. The hilly French countryside comes with the challenge of a lot of up-hill riding for Matt, which is quite different from southeastern Massachusetts’ relatively flat roads.

While biking is a large part of Matt’s preparation, even more important is his fundraising. Matt is just $3,000 away from his $5,000 goal and every penny that he can get is meaningful!

You can donate to Matt’s fundraising campaign and learn more about the Ulman Cancer Fund’s mission by visiting their website: https://ulman.z2systems.com/matthew-litchfield.

He is also currently running a Super Bowl Squares game – a table of 100 squares, three of which will be chosen based on each team’s square at the end of the 1st, 2nd and 4th quarters of the Super Bowl. Payments can be made to him directly via PayPal (paypal.me/mlitchfield1) or Venmo (@mlitchfield1).

Squares will be available for purchase up until the beginning of the game. You can pick squares and read more about the game at mattlitchfield.com/4k/squares.

Given how cancer has impacted so many people, it is truly remarkable to see a young person like Matt devoting so much time and effort to fighting this horrid disease. His efforts have not gone unnoticed and the University should be honored to call Matt an alum.