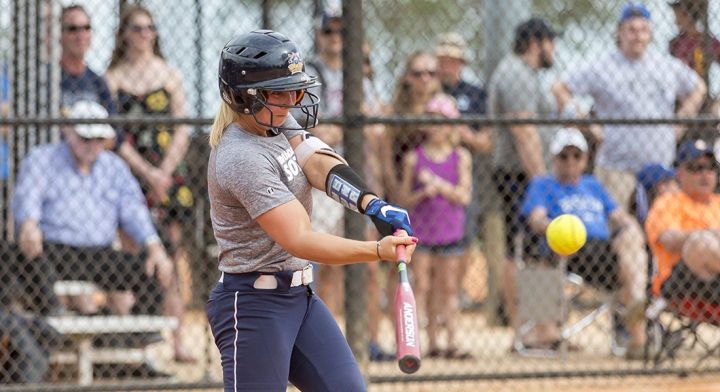 The Corsairs women’s softball team traveled all the way to Florida over spring break to begin their season in the 2018 Spring Games, a week-long softball competition that sees teams from all over the country compete.

However, the competition felt a little close to home on Friday, March 16 as they faced Gordon College and Fitchburg State. UMass Dartmouth had fared well up to this point; they started by winning four in a row and entered the Gordon College game 6-4.

No scores were on the board until the top of the 3rd inning, when the Corsairs hit a flurry of singles led by Brittany Polk. She and 3 of her teammates rounded the bases and reached home before the inning ended, notching 4 points and 5 hits.

Sophomore Annika Evensen pitched for relief after the third inning ended, and she kept Gordon away from the bases, only allowing two hits until the game’s conclusion.

The Corsairs put up one more run in the 5th to put an exclamation mark on the match, and it ended in a shutout, 5-0 UMass Dartmouth.

The Fitchburg State match later that day brought more competition and excitement to the field. UMass D struck immediately by putting two points up in the first inning, thanks to some singles and a double by Emily Colton.

The Falcons answered in the 3rd inning with 3 runs of their own to take a slim lead. The score remained 3-2 until the bottom of the 7th, the final inning, with the Corsairs at home plate.

Their bats became hot as they cracked hit after hit, including an effective bunt, bringing left fielder Nicole McSweeney home to tie the game up.

Sophomore Cierra Sheerin stepped up to bat with loaded bases, a tied scoreboard, and only one out. It was her time to shine, and she delivered by hitting a lob into an open area in left field to bring the winning runner, Leah Major, home. The Corsairs won on a walk-off single, score 4-3.

Major had a big game of her own, accounting for 3 of the team’s 11 hits.

UMass Dartmouth began the next day by facing California’s Pomona-Pitzer College, and even though the game was abbreviated to 6 innings, the Corsairs probably wished it was shorter.

Pomona’s Liz Rodarte pitched a complete game one-hitter to keep the Corsairs at zero points, McSweeney being the only one to connect with a base hit.

Meanwhile, Pomona-Pitzer kept connecting with base hits, sending runners home and racking up points. Their last hit was in the 5th inning, with a two run home run from freshman Makensey Druckman to bump the score to 8. That was how the game ended, 8-0, Pomona-Pitzer.

However, the Corsairs didn’t let the defeat get the best of them as they faced Pennsylvania’s Washington & Jefferson College for their last Florida match.

This time, it was UMass D’s turn to take control. The Presidents left three runners stranded after their first at-bat, while the Corsairs scored four runs in their first inning to take an early lead.

With the help of a triple by Kylie Fletcher, they increased their lead to 5 in the next inning. Washington & Jefferson managed to score a few runs as the game progressed, but the Corsairs shut the door on their comeback by scoring another four runs at the end of the game. The final score was 9-3, UMass Dartmouth.

The Corsairs put some impressive stats on the board with 14 hits, the most of the season thus far. They also stole a huge 5 bases, with Sheerin taking two of them.

The team has returned home and will play their next home match on March 31, with a doubleheader against Keene State. Come down to the baseball field and support the team!