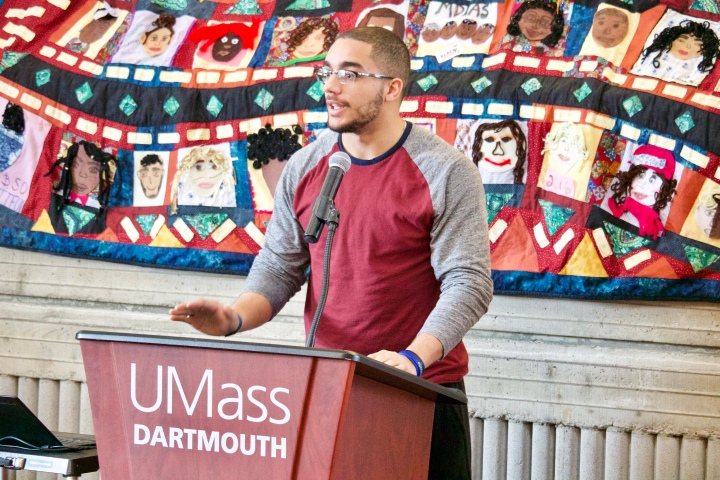 A well-known event on campus, students, faculty, and staff stopped by to hear and share works such as poetry, speeches and songs by African American artists. The podium in the atrium was decorated with two student made quilts.

The newer quilt, revealed at the beginning of the read-in, began its production at last year’s read-in, according to Deirdre Healy, Director of Community Service & Partnerships at the Leduc Center for Civic Engagement.

Sign-ups to read an author’s work had been going on for a few weeks, in the Frederick Douglass Unity House, and while an itinerary was set prior to the event, the audience was encouraged to share original poems or any works spread across a table in the LARTS atrium.

Senior crime and justice major, Mabel Tejada, read a favorite poem of hers, “6 Haiku (for Oprah Winfrey)” by Sonia Sanchez.

Deirdre Healy, shared the end of a speech made by Shirley Chisholm in 1983 reading, “Together we will march. And you know something? If we are able to do that together we will overcome.”

In discussing the political power women all around the world have taken up in recent events, Healy believes the past events have shaped the way women today are protesting and finding their voice.

Well known poems such as “The Souls of Black Folk” by W.E.B. DuBois and “My People” by Langston Hughes were shared with passion by their readers, truly in tune with the words at work.

Towards the end of the read-in, hosts played “Angry Black Woman” over speakers by spoken word poet Porsha O., who critiqued the American education system as well as the denigration Black women receive.

Associate Director of the Frederick Douglass Unity House LaSella Hall, shared a story in which he commented on the fact that people of color must endure matters of race all year long. He went on to say how these conversations with each other are mandatory, versus being able to walk out of particular conversations because they are “uncomfortable” or “sick of talking about race.”

As his second time co-hosting this event, Hall said, “I think it’s important to celebrate the works of various Black and African-American authors, poets, spoken word artists and folks who just have something to say.

A story that says we shall overcome from the kingdoms of Ghana and the kingdom of Kush to the cotton fields of Alabama.”

Faculty such as LaToya Robinson, Resident Director of Dell West shared a poem in which she shared the mutual insecurities of being a Black woman in America, well received by the audience with applause throughout the piece.

At the end of the event, Hall made a point to recognize the hardships endured by people of color every day, but to acknowledge the successes as well. The event closed out with the singing of the Black National Anthem by junior CVPA student Caiana Luse.