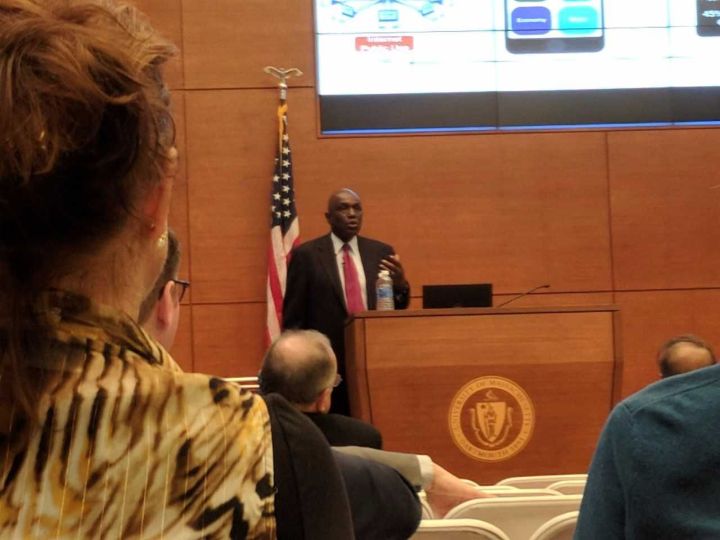 On Tuesday, December 5, UMass Dartmouth’s Chancellor Robert Johnson held a town hall meeting in the Grand Reading Room of the Claire T. Carney Library. In an almost hour-long presentation, Johnson explained his intentions as the new Chancellor for our university. Johnson then took questions from the audience, which was well attended but mostly not by students.

Chancellor Johnson began by encouraging people to use a hashtag, #umassdtownhall. If you have comments about the state of the university, use that.

The Chancellor then discussed progress. There has been a lot of progress in the past, but the rate of progress is ever increasing. He wants to prepare UMass Dartmouth students to take part in a world of rapid change. That means this school needs to keep changing.

To do this, Johnson stated that the university should be teaching students not just skill sets, but mindsets. This, he said, is because the robot age is coming, and machines will be able to do increasing amounts of work that people do. This is not just physical work, but mental things.

It is to this end that Chancellor Johnson is working. Previously, he has been getting settled on campus – learning about the physical campus, the organizational structure, and the people involved.

Johnson said that the best assets UMass Dartmouth has are the students, faculty, and staff. Areas in need of improvement he highlighted were the campus itself, but also (to use a cliché term) school spirit.

The Chancellor touted the quality of faculty on campus several times. He also emphasized that even though UMass Dartmouth is a Tier One National Research University, all professors teach. Johnson specifically said that he views this school as balancing research, teaching, and service.

He also took pride in the students here, referring to some alums like the CEO of Avon, Sheri McCoy and Captain Scott Tingle, an astronaut who is due to go about the International Space Station this month.

The Chancellor said that he sees the potential, or DNA as he said, for this university to grow to rival these other world-class institutions in the region.

Johnson said that one important part of this would be creating a better main campus for UMass Dartmouth. This would of course involve resolving some deferred maintenance, but also would include revamping the existing buildings here. The Chancellor did not promise to build shiny new buildings, saying that he didn’t want to get ahead of himself.

He explained that UMass Dartmouth needs to grow its sense of pride. People should be proud of going here and spread its  reputation, according to the Chancellor. As of now, the general opinion of UMass Dartmouth is not as good as Johnson would like it to be.

On a much more specific note, Chancellor  Johnson preempted questions about rumored changes surrounding health services on campus. He informed the audience that there was a move underway before his arrival to privatize or outsource health services. After weighing the pros and cons, he made the decision to keep things as they are. Health services isn’t going anywhere after all.

There were only two questions at the end. One asked for clarification of Johnson’s private versus public university dichotomy, and another asked Johnson to continue to seek out and act on input from people on campus. Chancellor Johnson appeared to demonstrate a commitment to transparency in keeping the general public in the loop.

The Torch is looking forward to see what Chancellor Johnson has in store for next semester.