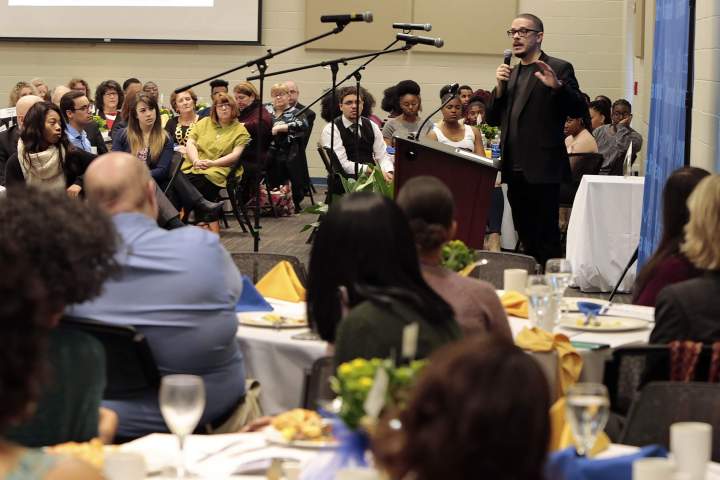 For sixteen years, the Office of Diversity, Equity and Inclusion has hosted a breakfast celebrating the great Dr. Martin Luther King’s legacy as well as marking the beginning of Black History Month.

Each year, they garner a keynote speaker and this year, Shaun King, activist and columnist for The Intercept, spoke to the full crowd in Lawrence Hall at Woodland Commons about fighting for social justice along with several hard truths on the matter.

Despite chilling weather and snow, the event quickly filled to capacity as University staff, several students, and a few local politicians strolled in. Among the students there was the D’sword Choir.

Dressed in suits and dresses, many adorned with African regalia, the group opened the event with a beautiful rendition of “Lift Every Voice” that drew lengthy applause.

Following the choir, Chancellor Robert E. Johnson went to the podium and recited the classic poem “Harlem” by Langston Hughes to use a celebrated black poet to tie in his speech honoring Martin Luther King Jr.

The poem famously asks, “What happens to a dream deferred?” but Johnson had no answer, instead highlighting the importance of MLK never letting his dreams defer. He stressed how “no fire hose, jail cell, or threat could deter him” from achieving his dream of racial equality.

“You can always tell a Morehouse man,” Johnson grinned, “but you can’t tell him much!”

The opposite can be said for King to the attendees, as he talked in detail about racial inequality, beginning with his own struggle trying to graduate from Morehouse while juggling a wife, new baby, and trying to take part in activism.

He ended up graduating Morehouse with a good job but at the expense of abandoning his activism entirely.

It wasn’t until he saw the video of Eric Garner’s death in 2014 that shook King to his core and ultimately inspired him to quit his job and work fulltime as an activist.

“In 2014, we learned that there was no justice.   Twelve hundred people were killed in 2014 but none went to jail,” King solemnly stated.

Through everything from Twitter rants to protests, King’s profile grew and he amassed a million followers on Twitter.

His activism prowess was apparent in his nearly hour-long speech as he wowed the crowd with many anecdotes on history and humanity, specifically some important information that followed him from his college days.

One crucial class King attended at Morehouse was a history class he initially wanted to drop. The class focused on a nineteenth-century historian named Leopold Von Ranke who is credited as a founding force in how history is studied today.

The historian found that as technology evolved humanity remained stagnant or even regressed at various points in time.

King summed it up with a slide showing a straight timeline that dipped after key points in history. The dip represents the backlash that follows momentous progress in history.

After the Emancipation Proclamation, for example, the dip manifested as decades of Jim Crow laws.

Then after the Civil Rights Act, King continued, Nixon coincidentally began the war on drugs. Or the most relevant case, our society electing Donald “African countries are shitholes” Trump immediately after the first black president.

The trend is bad enough, but King reached a more troubling conclusion:“Here’s what concerns me about the dip, and I have to tell you this because I’m deeply troubled by it. Sometimes the dip can last for a few years, sometimes they last for a few decades.”

A fitting end, since if there is one takeaway from the speeches, is that Black Americans’ history is rooted in persevering through tears and hardship.