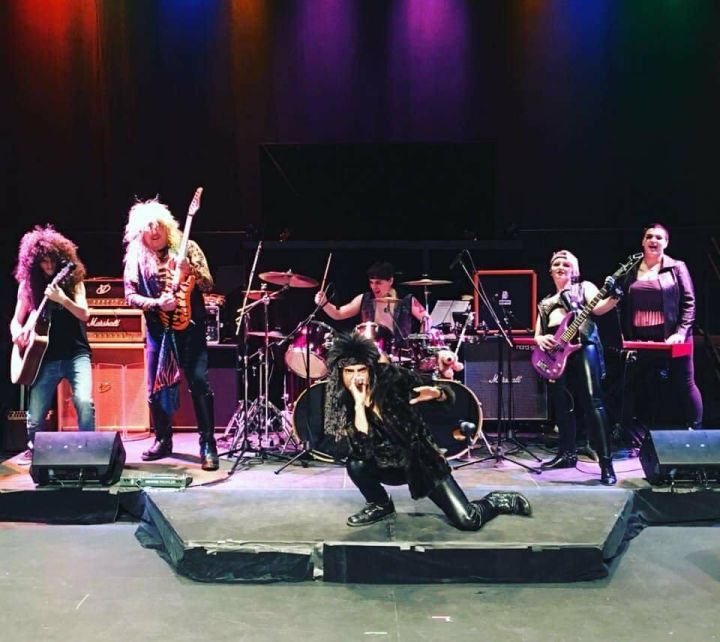 Bringing back the glory days of guy-liner, and leather pants, The UMass Dartmouth Theater Company put on a kick-ass show this past weekend with “Rock of Ages” a jukebox musical that tells a story of sex, drugs, and rock & roll in the Regan era.

Set in the late 80’s “Rock of Ages” follows young and idealistic Drew Boley played by Tyler Rebello and Sherrie Christian played by Kenzii Farland as they navigate their way through the sunset strip at the height of rock and roll excess. They encounter super star Stacee Jaxx played by Nathan Tarantino, owners of the once illustrious Bourbon Room Dennis Dupree and Lonny played by Ryan Edwards and Allyson Andrade, as well as counter culture protestor turned city planner turned rock rebel Regina Koontz played by Megan Sullivan.

All of the actors, from Stacee Jaxx all the way to waitress #1, bring an amazing energy that puts the audience in the mood to rock. Several audience members were singing along to rock classics like “We built this city” by Starship, “Here I go again” by Whitesnake, and “The final countdown” by Europe.

The male and female leads, Tyler and Kenzii give powerful performances that drew the audience in. Strong vocals from the two of them, as well as compelling acting drive the plot and keep the audience invested in the show. Lonny, played by Allyson kept the mood and energy of the show high from her opening song all the way through the final bows and brought comedic relief as a fourth wall breaking, omnipotent narrator with a love for the fog machine she owns with her partner in rock, Ryan Edwards.

Megan Sullivan, playing the revolutionary Regina brought a rebellious energy that commanded the stage as she called for saving the rock and roll lifestyle from greedy German land developers Hertz and Franz played by Spencer Uguccioni and Emma Boc who delivered wonderful performances as the main antagonists of the musical.

However, as important as the lead and supporting actors were to this show, the large ensemble who played rockers in the Bourbon room, protesters, and exotic dancers at the Venus club helped to bring the stage to life and really give a sense of the time and lively atmosphere of Los Angeles in the 80’s.

The show however was not without its faults. Oftentimes, the amazing live band, Arsenal, consisting of a piano, a bass, drums, a rhythm guitar, and a shredding lead guitar, over powered the vocals of the performers on stage and drowned out dialogue. There were also technical issues with some actor’s microphones not being on during portions of songs, and during dialogue sequences, sometimes leaving the audience guessing about important plot points that they missed. Scene changes also consistently left dead air on stage, often leaving the audience in the silence and the dark for longer than was comfortable.

One glaring issue that took away from the performance in a major way was the live piano and synthesizer. Off-tempo and off-key playing marred the otherwise spectacular live band. This would not have been as major of an issue if the show did not consist of such recognizable rock and roll classics like “Don’t stop believing” which opens with an iconic keyboard part, that was sadly handled poorly by the live piano.

Despite the relatively minor flaws, the cast of Rock of Ages put on an amazing show that this reporter went to see twice. If you missed this production, you won’t find another experience like it on the UMass Dartmouth campus until next year when the UMass Dartmouth Theater Company and 20 Cent Fiction Production Company roll out their 2018/2019 theater season.