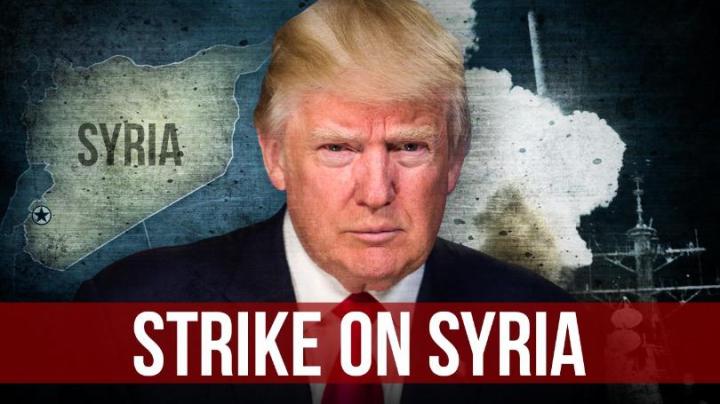 Trump has created some extreme tension between Syria and the United States recently.
The United States launched 59 Tomahawk missiles on a government airbase in Syria, in response to the chemical weapons attacks imposed on Syrian citizens by the Syrian government, which caused dozens of fatalities. According to CNN Politics, “[The attack] represents a substantial escalation of the US military campaign in the region, and could be interpreted by the Syrian government as an act of war.”

As I mentioned in my article about North Korea last week, it seems like Trump wants to go to war with anyone. Making threats to North Korea, attacking Syria, what’s next?

According to The New York Times, Trump is seeking to increase the military budget in the U.S. by 54 billion dollars. Why is Trump so adamant about a war that could risk millions of U.S. soldiers’ lives?

I can understand why the Trump administration thought that some drastic changes needed to be made in regards to Syria. The leaders of the country are clearly corrupt, and the Syrian people are suffering daily.

But, attacking a country so that they don’t attack their people makes little sense. What was the motive behind this action? Did Trump really believe that this would scare the Syrian government into submission?  If he knows anything at all about Syria, he would know that the country is a mess, and a solution to their corrupt government is a complicated one that won’t be solved by launching missiles onto their air bases.

I was interested to see what Trump would say in his speech about the attacks. I’m all about the benefit of the doubt, and I was really hoping that Trump would give the American people a rational reason as to why those missiles were launched. But, of course, this speech made me even angrier. In the speech, Trump makes reference to God three times.

Sure, presidents often make references to God, but not Trump. As CNN Politics says, “It’s rare for President Donald Trump to mention God, and rarer still for him to name-drop the Almighty three times in a single short speech.”

Trump used religion in his speech because he knows that it appeals to religious folk. He knows that if he used phrases like, “No child of God should ever suffer such horror” and “God’s wisdom as we face the challenge of our very troubled world,” religious folks will pay more attention to his message, and perhaps start attributing Trump’s actions to the will of God. As someone who is not religious, Trump’s religious speech obviously does not affect me, but it’s quite frustrating that Trump will use any tactic in order to get Americans on board with his insane plans and actions.

As a friend once told me, “Every president has to be a bit manipulative”, which I do agree with. However, when a president is so manipulative that he tries to make people believe that attacking a vulnerable country like Syria is the right decision, that’s when a leader is corrupt.  Trump’s use of religion in his speech is quite offensive, and clearly meant to manipulate the American people.

The Trump administration made a horrible choice in attacking Syria. The logic of attacking a country so that that country won’t attack its people is quite ridiculous, considering the Syrian government is dangerous and could potentially attack the United States as well.

Launching missiles onto a Syrian government airbase did nothing but anger the government even more, which could, of course, cause them to attack the U.S., or perhaps be even more violent to the Syrian people.