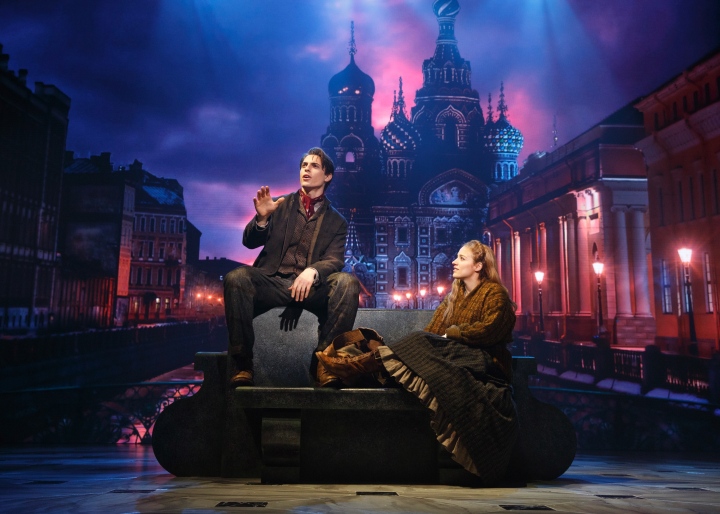 Opening for its first night on April 24, the new musical Anastasia arrived on Broadway after making waves at the Hartford Stage in Connecticut.

Returning to the stage from its original run, Christy Altomare and Derek Klena will reprise their roles as the lead characters Anya and Dmitri respectively.

The show is an updated stage adaptation of 20th Century Fox’s 1997 animated film of the same name. Much to the delight of fans, a majority of the original film’s score has made a return in the live adaptation, albeit with some notable changes.

Rasputin, the film’s main antagonist (based off of the historical advisor to the Romanov royal family), has been cut from the production to improve the show’s reach for accuracy.

Although the show is fictional in nature, the play’s producers and writers removed the villain in order to streamline the plot and make it possible to perform the show live.

Set in post-revolutionary St. Petersburg, the Russian Czar and his family have been executed and the country is in despair after the end of the war. Anastasia follows the story of the young Anya who dreams of a better future for herself while desperately trying to recall her forgotten past.

She meets con men Dmitri and Vlad, who are looking for a young girl to play the part of Princess Anastasia, in order to collect the reward put up by the Dowager Empress Maria Feodorovna, Anastasia’s grandmother.

The story makes a grand entrance onto the stage, as it is both visually stunning and emotionally compelling. Set designers incorporated moving panels into the floor to aid in ballroom dance scenes and a digital screen behind set pieces that provides a dynamic, easily changeable backdrop.

Aside from the initial nostalgic draw to the film, each cast member breathes new life into their characters, creating a fresh and distinctly memorable experience for theatre goers interested in seeing it.

I myself was lucky enough to see the last showing of Anastasia’s Hartford premier, and it left me wanting more after the final curtain closed.

After months of practice and careful changes, the Broadway show is sure to have hammered out any of the minor kinks in the show’s initial run, from costumes to minute choreography details.

New teasers of the performance have been circulating around the internet, and YouTube has been plugging ads for the release for the past few months. Admittedly, I haven’t been able to skip them despite seeing them far too many times, but the show’s musical performances have only improved since its May-June run in 2016.

Currently the show is booked through January 2018, and the first few months have already sold out online. Seats are priced anywhere from the $69 mezzanine seating to the $359 premium seating options.

Anastasia is a show that is sure to please anyone who goes to see it. Fans familiar with the original movie will be happy to see a mix of new and old music, as well as the enthusiastic on-stage portrayals of the well-loved animated versions of the characters.

Those unfamiliar with the show will be in for a treat as well, as the live adaptation is artfully done and masterfully executed.

Tickets for the show are selling quickly, and I would advise anyone who is interested to get seats as soon as possible.

The show is simply breathtaking, and it is an investment well worth making.

“The match was anyone’s up until ECS’s Sierra Orr served two consecutive aces, bringing the lead to Eastern Connecticut. From there, the Seahawks were on fire, and the set ended with them in a 25-18 lead.At this point, the teams went into a fourth set.“ . Sports: A bittersweet day for UMassD volleyball, by Samantha Wahl. (Link in bio)
Diving into this album, one is hit with a wall of sound that comes in hard and doesn’t let up. The first tones of the song I see through you harken back to the overly-artificial synthesizers found in the introductions of 1980’s educational science videos.” . Arts and Entertainment: Uncle Acid and the Deadbeats: a first reaction, by Sawyer Pollitt (Link in bio)
UMass Dartmouth senior Tom Sheran won the Great Northeast Atlantic Conference Championship in commanding fashion over the weekend by carding a two-day total of 145, topping runner-up Claudio Soukamneuth of Johnson & Wales by seven strokes. Sheran fired an even par round of 72 on Saturday at Blackstone National Golf Club in Sutton, MA, and then closed out the tournament with a one-over par 73 on Sunday. The senior putted well over the weekend and distanced himself from the field by carding 9 birdies. He also took advantage of the par 5s, playing them in 3-under overall. This is the second time in Sheran’s career that he has earned the title of GNAC Player of the Year.” Sports: ​​Sheran wins GNAC Championship to earn Player of the Year golf honors. By Greg Estabrooks. ​(Link in Bio)
“One of the most noticeable winners of the night was the Nobel Prize for Physics recipient Donna Strickland. As the first woman to win the award in fifty-five years, and third in general, the win seemed like a grand statement towards women in the science field. Strickland, alongside her co-inventor Gérard Mourou, developed a method of “generating high-intensity, ultra-short optical pulses” according to the Nobel Prize website. In a subsequent NPR interview, Strickland gushed about the honor, proclaiming, “I feel unbelievably honored to be, you know, with Marie Curie and Goeppert Mayer. It’s like, how can I be in the same breath as those three?” Arts & Entertainment: Women make a strong impact on the Nobel Prizes. By Seth Tamarkin. (Link in Bio)
“The Corsairs traveled up to Castleton, Vermont this weekened to take on the Castleton Spartans. In what proved to be a very competitive match, the Corsairs would eventually pull away with a win. A heroic 59th minute goal from Joe Morehead would be the game winner for UMass Dartmouth in their 2-1 men’s soccer victory during the Saturday evening match in Castleton Vermont.” • Sports: ​​Men’s soccer takes home a win from Castleton, Vermont. By Elijah Santos (Link in Bio)
“The crowd’s energy was electric, unlike anything I had experienced at a UMass event thus far. It was packed. By the time the show started, there were people already content with standing in the back instead of hunting for the sparse free seats in the establishment. When the curtains opened, the clamoring crowd fell silent. Complete Destruction sauntered to the stage in full drag, dressed as a wicked witch. Well-worded, with clipping tones and clearly well-accepted banter, they started the performances off with introductions.” Arts & Entertainment: LGBTQ fundraiser drag show awes crowd. By Eric Sousa (Link in Bio)