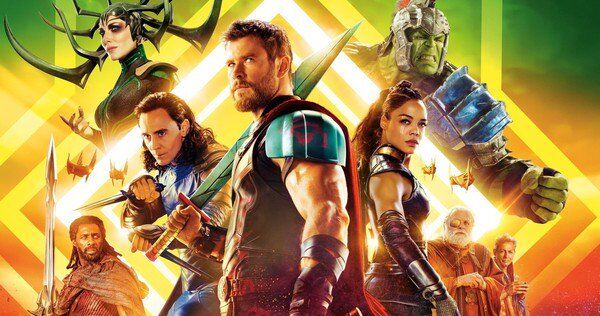 The God of Thunder struck the box office during its debut weekend November 2nd.

In the final act of the Thor three-part storyline, Thor returns to Asgard but is met with unexpected hostility. As the movie’s title would suggest, the movie centers around Ragnarok, the Norse mythology equivalent of the end of the world, where Asgard, the home of Thor and his people is destroyed.

The movie may be Marvel’s boldest movie so far and that’s saying a lot considering the quality of movies we’ve gotten from the Marvel Cinematic Universe thus far. Thor staked his claim in the MCU after his debut film in 2011 and although absent from Captain America: Civil War, is a stable of the Avengers squad we’ve come to know and love.

Though it did well in the box office, Thor: The Dark World, the second movie in the trilogy, fell short of fans expectations and was especially dry at points.

Thor: Ragnarok however, rights all of the wrongs made in the previous Thor films, and shows a different side to the God of Thunder and the rest of the jam-packed Asgardian cast. Thor is up to his Thor things, swinging his hammer around and channeling the power of thunder and lightning but when he loses his hammer he must reinvent himself, channeling his true power as the God of Thunder.

Everyone’s favorite Marvel villain and God of Mischief, Loki, returns, up to his usual antics and acting as true antihero instead of a straight-up villain. Like you can expect Loki is constantly flip-flopping between helping his brother and the cause or just helping himself before ultimately making a decision.

Family is an important theme of the film as its main villain Hella, who’s master plan is to reign Asgard and conquer the galaxy, is revealed to be the sister of both Thor and Loki. Her strangle-hold on Asgard forces the usually opposing brothers to fight together in honor of Asgard and also their father, Odin.

Like Thor, there was one anchor character missing from the Marvel Cinematic Universe since Avengers: Age of Ultron. It’s an angry, green, giant, and angry again man… the Hulk. With the Hulk being such a main character, the movie becomes infinitely more enjoyable. The Hulk and Thor have always had an interesting dynamic on screen in the Marvel universe. The two Avengers teammates always seemed to butt heads or compete with each other in a test of strength. Luckily, that didn’t end in this movie.

The banter between Thor, Loki, the Hulk, and Doctor Banner provides much of the comedy throughout the movie, but it might just be the supporting cast that makes it so spectacular. Along with those three, they form a team to take down Hella that includes Valkyrie, one of Asgard’s elite female warriors and Korg, a member of the alien Kronan species, who meets Thor during his gladiatorial trails on the planet Sakarr. Now not to be dramatic or anything, but Korg might be the greatest character of all-time. His overall happiness and comedic timing makes the character a perfect fit for a doomsday like scenario that is Ragnarok.

Jeff Goldblum also makes an appearance as secondary villain to Hella. Goldblum plays the Grandmaster, an ancient alien being who runs the trash filled, gladiator obsessed planet of Sakarr. Goldblum’s quirkiness is an awesome contrast to the power and grandiose is character seems to hold on the planet and even other parts of the universe, making his presence a pleasure anytime he’s on screen.

Thor: Ragnarok is lighthearted yet serious like every Marvel movie that comes out, the perfect balance between the two. It’s also thrilling enough and engaging to the point where you won’t ever be disinterested, I went to a midnight showing on the Thursday of its release and was wide awake throughout. Even if you might be a little fatigued by the constant rotation of superhero movies over the last few years go and see Thor: Ragnarok, it’s easily the best of the three Thor movies and you’ll leave the theater with a good feeling and smile on your face, ready to see what happens next after the post-credit cliffhanger.