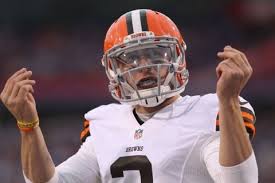 Johnny Manziel will be back on a football field this spring. Beginning on March 28, the comeback season begins in Austin, Texas.

The ex-Cleveland Browns and Texas A&M Aggies quarter back wowed fans during his time in College Station. In 2012, he became the first ever freshman to ever with the Heisman Trophy after 47 total touchdowns. He returned again to Texas A&M and was once again a nominee for the Heisman Trophy. His two back-to-back dominant seasons with Texas A&M solidified him as one of the most exciting and talented players in the entire country… the only issue was his attitude.

Only two years ago, Manziel was accused of domestic violence.

“He hit me with his open hand on my left ear for jumping out of the car,” reported his ex-girlfriend, Colleen Crowley. “I realized immediately that I could not hear out of that ear, and I still cannot today, two days later.”

His constant drinking, partying, and if we’re being totally honest, asshole behavior, made him a black sheep in the NFL. Even though being clearly the most talented player in the NCCA his draft year, Manziel slid all the way down to the Cleveland Browns with the 22nd in the 2014 NFL Draft. A year later, despite the franchise desperate state, the Browns cut Manziel after the end of the season.

Manziel hasn’t played a football game since he was cut by the Cleveland Browns. During an interview recently with Good Morning America, Manziel spoke about his bipolar disorder, battle against depression, and escape from it all through alcohol abuse.

“I was self-medicating with alcohol because that’s what I thought was making me happy to help me get out of that depression to a point where I felt like I had some sense of happiness,” said Manziel during his interview.

Since then, Manziel says he’s managed to stay sober for around a year now and has taken steps to better his personal mental health. Last year, Manziel got engaged to his girlfriend Bre Tiesi and has better himself at least in the short term.

His ultimate goal though is to get back in the NFL saying, “I’m watching other guys doing what I want to be doing and I’m sitting on the couch being a loser.”

Dealing with his personal demons is great but in order to find his way back into the NFL, he needs to get back on the field. After not reaching a contract agreement with the Hamilton Tiger-Cats of the CFL, Manziel is turning to the Spring League her in the states. The league was created in 2017 to help showcase developmental talent for NFL and CFL teams. Comprised of only four teams, the league plays from March 28 to April 15, Manziel will be playing for the Spring League South team.

His time in the Spring League will be his best shot at a job in football whether that is actually back in the NFL, or somewhere else in the CFL. Although he seems to be a changed man, Manziel has already “burned every bridge possible” according to an anonymous NFC team executive.

Maybe his issues were related to a mental illness. Maybe he was actually to in over his head and looked to drugs and alcohol for an escape. Maybe he’s really changed. Maybe he’s ready to be an NFL quarter back again.

Then again, maybe he isn’t. NFL executives have seen this before from countless players who weren’t actually changed men, so what reason do they have to believe Manziel?  It’s going to be an uphill climb, but the road to redemption isn’t meant to be an easy one.