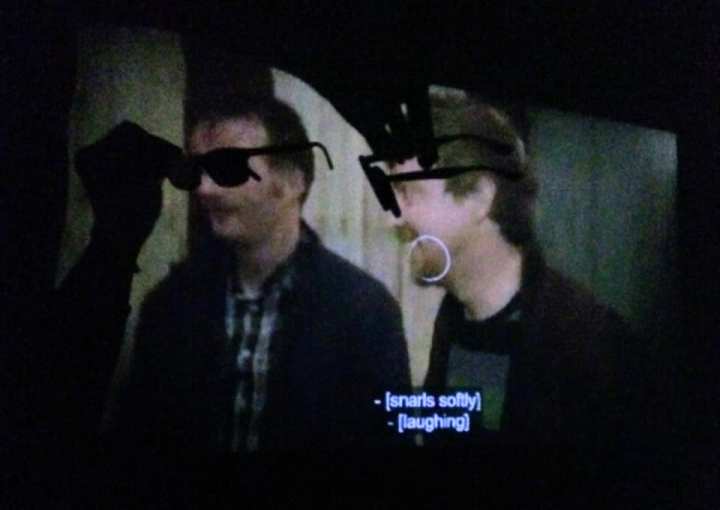 It’s not every day you hear someone tell you: “Feel free to talk during the movie”. But that is exactly what Sawyer Pollitt says at the beginning of 20 Cent Fiction’s Transgressive Cinema.

This past Thursday, September 20, was the first showing of the newly revived film-viewing series, which had been on hiatus since 2006. Pollitt came across a mention of the series in 20 Cent’s constitution and took it upon himself to bring it back to UMass Dartmouth.

So that is how I came to be in the 20 Cent Office on Thursday at 7 PM, sitting in a circle that contained a sofa, a futon, and the prop wheelchair used for Rocky Horror Picture Show shadowcasts. A handful of students nestled into the improvised seating and waited to watch a… bad movie? Not quite, says Pollitt.

“So-bad-they’re-good.” He explains. “At the end of the day, we need to be entertained by this.” And so he pushes some buttons on a laptop, and What We Do In The Shadows begins to project onto a white sheet.

When he says “entertained by this”, you may think he’s only referring to the movie. You would be wrong. At Transgressive Cinema, the audience is at least half the entertainment. The entire film, people improvise comments in response to the on-screen dialogue, a la Rocky Horror or The Room.

The audience reacts openly to funny or sad lines and makes quips about on-screen events whenever possible. At times it gets loud, and then all are glad that Sawyer put on the subtitles.

A few times during the night, the film buffers; the audience takes advantage of the moments of freezing to hold sunglasses up in front of the projectors, trying to get characters to “wear” them.

Practically none of it would ever fly during a traditional movie night, and that’s the fun of it. It is not only the movies that are transgressive here, it is the movie-watching experience. Within the 20 Cent office, movie watching becomes loud, (sometimes) funny, and undeniably human. Most of all, it becomes a team sport. The audience bounces joke after joke around amongst themselves with gusto.

Conversation and laughter are the point of the night. “The idea with Transgressive is to show s—– movies and talk s— about them.” Sawyer tells us. At the same time, he wanted to ease people into the experience a bit: “I didn’t want to show a s—– movie the first week, because I didn’t want to scare off new people.

So this movie’s actually pretty good.”
And it is. Surprisingly, What We Do In The Shadows is a good, if not offbeat, film. A mockumentary following the lives of four vampires who share an apartment and struggle with nightlife in New Zealand, Shadows is not funny in the typical “so-bad-it’s-good” way; judging by the laughs it gets, it is funny in the “good comedy writing” way.
When the lights come on and the snacks are forgotten, only one question hangs in the air: when is the next showing?

The next Transgressive Cinema showing will take place on October 4 at 7 PM in the 20 Cent Fiction office. The movie of the evening will be Rubber, a horror movie about a sentient tire that goes on a killing spree.

If Transgressive Cinema sounds to you like an you could find yourself at, feel free to stop by, stay for the movie, and even pitch one yourself!