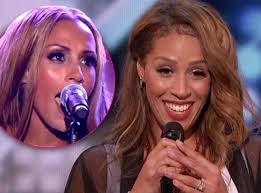 The rise of reality television over the course of this century has been interesting to watch.

TV shows like American Idol and America’s Got Talent have revolutionized the way that many Americans view fame; instead of some faraway, impossible dream, it has become something within the reach of the average Joe; at least, the very talented average Joe.

People cherish the stories of nobodies finding the fame they deserve through these shows; Kelly Clarkson, Carrie Underwood, Susan Boyle, and countless other “regular people” have found fame and fortune thanks to these programs. The rags-to-riches narrative, it would seem, is a sacred staple of reality talent shows.

So when Glennis Grace, a thirty-nine-year-old single mother, showed up on America’s Got Talent and blew everyone away with her killer voice, it was par for the course. She had all the makings of a typical reality TV sweetheart. “I’m a little nervous… to sing for you guys.”, she said to the judges during her audition.

Sounds like a typical AGT story. Add in the fact that Glennis had an incredible voice, and viewers had no problem rallying around her. But there was something a little unusual about Glennis Grace: she wasn’t an unknown at all. Grace has recorded solo albums released in the Netherlands going as far back as 2005.

In 2012, her album This is My Voice peaked at number 2 on the Dutch music charts. As recently as last year, she was known in the Netherlands as one-quarter of Ladies of Soul, a singing supergroup. With them, she has performed in sold-out tours. Not really Glennis the “rags-to-riches” narrative viewers may have originally assumed.

Was it wrong for a musician with a previous career to enter America’s Got Talent, a competition that so often profits from the idea of finding diamonds in the rough? Audiences didn’t seem to think so. Glennis reached the finals of the show, not being voted off until the Final 5.

Here’s the thing: America’s Got Talent and shows like it exist to entertain people. We see them as avenues for the undiscovered to find fame and fortune, but that’s not what they’ve ever claimed to be.

Most AGT singers come on because they want to expand their reach, and Glennis did the same. The Netherlands is a relatively small country; wanting to break into a solo career in the United States is arguably a much more ambitious endeavor.

In a way, Glennis was just like any other contestant in that she wanted to share her talent with others. It’s just that most people want to take the first step in their career, while Glennis wanted to take the next one.

Grace isn’t the only singer to have entered a talent show to bolster an existing career. Just six years ago, Cassadee Pope won season three of The Voice.

Prior to appearing on the show, Pope had been (and continues to be) the frontwoman of Hey Monday, whose 2008 album Hold on Tight had reached number 11 on the Billboard Heatseekers charts. However, Pope had been having a hard time being taken seriously as a solo artist following Hold on Tight’s success; her victory on The Voice put her back on the map out of the band’s shadow.

It’s impossible to ignore that many people trying to start a career in music have already been in a band at one point, or already done some studio work.

The idea that everyone on shows like AGT must be the kind of everyman who has never sung outside the shower and never set foot in a studio is wildly unrealistic.

Though it may be intuitive to feel cheated hearing that Glennis was already a successful vocalist, it makes almost no sense to be angry.

AsShe entered AGT to pursue her dream; why be surprised that she had made some attempt at pursuing it before?