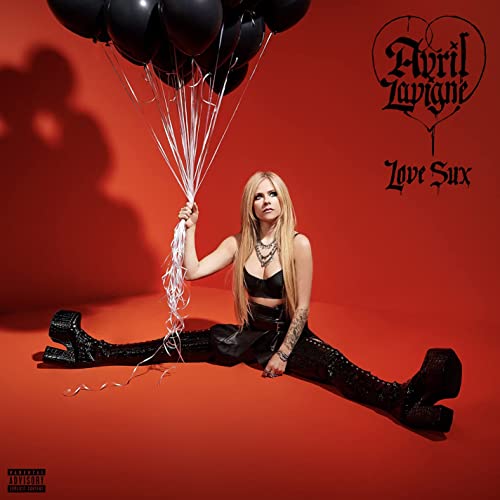 Before I’d heard “Bite Me”- the lead single off of Love Sux– I’d brushed Avril Lavigne off as little more than a bonafide pop star, having heard only her radio hits. These newer songs introduced me to another side of Lavigne that I’d been a stranger to for far too long- the fiercely feminine punk princess who helped to define fashion for an entire generation of emo kids.

Love Sux opens strong with “Canonball”, a heart thumping, first pumping, adrenaline rush of a song that sets an energetic tone for the rest of the album.  The fast paced instrumentals of “Canonball” gallop along in an amusing effort to keep up with Lavigne’s breathless singing. Simple yet effective, the lyrics express the kind of blunt honesty that most of us are held back from saying out loud. Lavigne- adopting the sassy, dismissive attitude of a fed up inner voice unwilling to keep quiet- exhibits no such restraint, loudly singing, “I’ll be happy if we never speak again” and “I hope that when you see my face it starts to make you feel a little sick.”

Lavigne continues to  playfully re-use this tactic throughout the album, especially on Bois Lie and Bite Me- (the musical equivalent of trash talking), – Love It When You Hate Me, (a love song that isn’t so much sentimental as it is annoyed) and the eponymous “Love Sux.”

The album starts to lose steam at track five, around which it suffers from a series of mediocre filler songs. While still enjoyable to listen to, these songs don’t pack the same punch as the first few; they largely deal with the same subject matter (uncertainty about diving into a new relationship) and this repetitiveness makes their too-pristine production quality at times more glaring. It isn’t until towards the album’s end  that it starts to pick up again, with the confrontational “F.U.”, followed by the vulnerable  “Dare to Love Me.” The album ends on “Break of a Heartbreak” which ties together the themes of wanting to move past bad breakups, yet being unsure how to do that.

On the heels of my own rough heartbreak, Love Sux was exactly the motivation I needed to pick up the pieces and keep moving forward. What makes this album successful, and a  worthwhile listen,- even if at times it drags- is its self awareness. It’s sound isn’t stuck in the past, but grounded in its modernity, and its lyrical context does not pretentiously wax poetic. All in all,  it’s a pretty straightforward homage to the relatable experience of loving and losing people. Most surprisingly, is the album’s overtone of optimism; never, at any point, does Lavigne dwell in depression over the end of her past relationships. Rather, ever empowered, she looks to the start of something new, even if that comes with its own set of doubts and difficulties.

Best songs: Canonball, Bite Me, F.U., Dare to Love me

Listen to the album here: