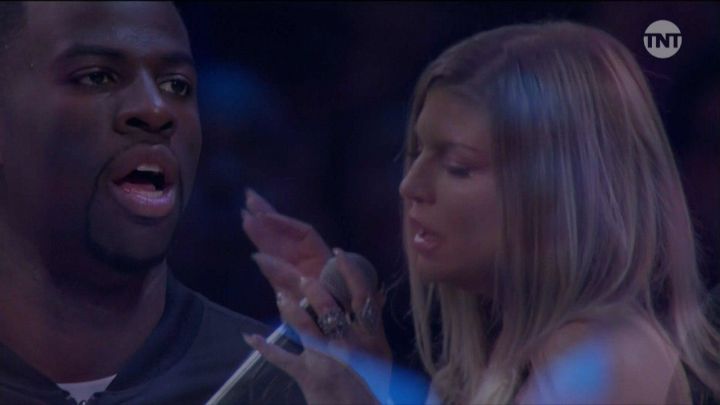 Ah, the NBA All-Star game. The annual event showcases some of the best basketball players in the world. This year however, was more special than most. Taking place in the Los Angeles Staples Center, the game featured a new stipulation; instead of Team East vs Team West, we got hand-picked team’s from the league’s two biggest stars, creating Team LeBron and Team Steph.

The game is more of an event than it is an actual game though. Being in Los Angeles, the flamboyancy was turned up to 1,000. There was an entire introduction performance and roast of the players by Kevin Hart and Rob Riggle before we even got to the real show, the National Anthem.

The (formerly) fergalicious Fergie was set to perform the Star-Spangled Banner to kick the game off. With the entire world tuned in to watch her performance… Fergie choked.

She didn’t just choke, she choked hard. So hard that during the anthem, the camera cut to multiple players who were mid-laugh or smile. To put it bluntly, Fergie may have performed the absolute worst National Anthem of all-time.

It was so bad, that she literally had to apologize for her performance. Fergie called herself a “risk taker,” telling TMZ, “I love this country and honestly tried my best.” Tried her best. Tried. Her. Best. That was her best.  Draymond Green was staring off into space shocked at what was happening, Jimmy Kimmel was doing his ALL to not burst out laughing, Steph Curry and Chance the Rapper were literally laughing on live television, and that was her best.

Jack Maccord, a sophomore psychology major was one of the many confused by her terrible performance. “Just watching the reactions of the people and players around her on the court, you could really tell how they felt about it,” said Maccord, “I understand how she wanted to put her own little touch on it but the National Anthem has been around for like over 200 years, it’s pretty good the way it is.”

If there’s anything good to take out of this for Fergie, it’s that she quite literally stole the show. Despite the amazingly athletic maneuvers put on during one of the more competitive NBA All-Star games, all everyone was and still is talking about is Fergie’s National Anthem blunder.

At least her name is out there in the news again, because we all know the direction her career has been headed since the Black Eyed Peas broke up… down. In all honesty though, it might be time to hang it up for Fergie. She used to “make them boys go loco,” but now she just makes everyone go “oh no” whenever she’s anywhere remotely near a microphone.

Lucky for Fergie, “Life Goes On” and “Big Girl’s Don’t Cry.” Although she was a little “Clumsy,” “A Little Party Never Killed Nobody” so I’m sure Fergie still thinks she’s “Glamorous.” I mean it’s not like the “London Bridge” fell down or anything.